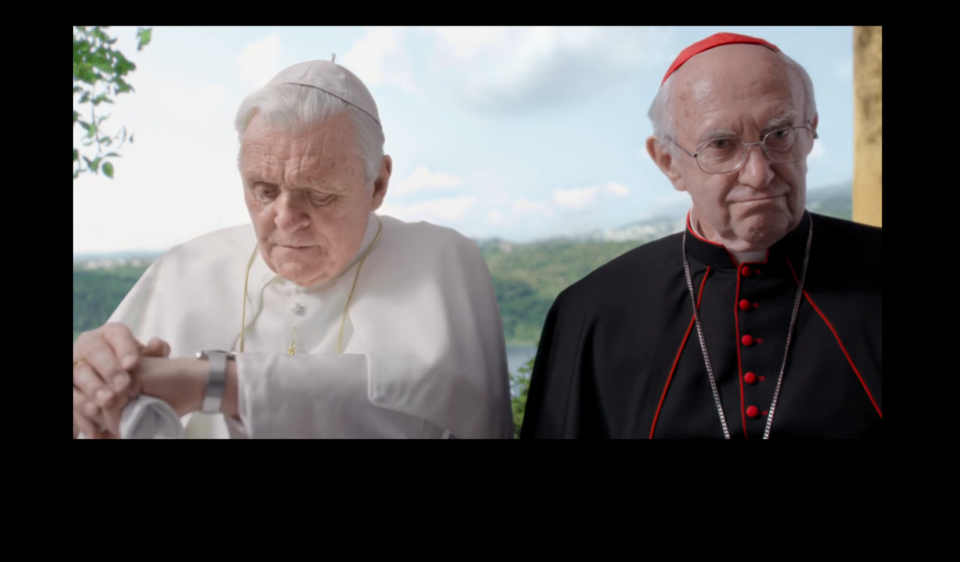 During the holidays, the Fantastrial team watched the Two Popes. What we later termed “The Two Popes smartwatch” immediately got our attention. In the movie, Pope Benedict XVI wore a smartwatch that pushed him to achieve his 10,000 steps a day goal. Film critics focused on how the watch’s instruction to “Keep Moving” was alluding to Pope Francis’ intent to reform the Church. But we’re not film critics. We’re Fantastrial.

What do we know about The Two Popes smartwatch?

The movie almost goes out of its way to hide the smartwatch from view. The watch itself is visible in just one scene. Even then, it’s just a side-glimpse that lasts moments. After watching the entire film, here’s what we gathered about it:

Is The Two Popes smartwatch real?

Unfortunately, no smartwatch ticks all the boxes. In 2012, not a single smartwatch on offer (and there weren’t many) looked like our elusive smartwatch. When looking among later models, things get slightly better. Our crack team of gadget experts pinpointed a likely candidate; the iMCO CoWatch. This watch launched in 2016 after a successful Kickstarter campaign, the main innovation being Alexa integration. Alexa is now capable of informing users of their step count, which is very close to what our mystery smartwatch does in the film. Nonetheless, it’s evident that significant changes to the CoWatch’s software would be necessary to perform identical to the movie. Although the CoWatch is a good candidate, we believe that the Two Popes smartwatch wasn’t even a smartphone; the dial never came on-screen to convince us otherwise.

The Two Popes is not historically accurate, even when it comes to gadgets.

On the Two Popes smartwatch, the writers of the film wanted a symbolic plot device more than they wanted a realistic device. The film breaks from what really happened during the resignation of Pope Benedict XVI. It’s no wonder that it takes artistic liberty with its technology, as well. From where we stand, there is no Two Popes smartwatch. But we hope that such a device is made to encourage mobility in the elderly. And as our first Topic of the Week for 2020 draws to a close, we wish you all a happy and productive New Year, full of innovative tech!

You probably can’t McGyver a ventilator